ICA’s future report: How the pandemic will affect our consumption by 2025

We will continue to work remotely or semi-remotely – the home will experience a renaissance, and the pursuit of experiences and community will strengthen. The climate issue will play a larger role, and concerns about future crises will grow. These are just a few of the distinct trends that will influence our consumption patterns, according to ICA’s future report Växa Tillsammans - konsumenten och den växtbaserade maten 2025 (“Grow together – consumers and plant-based foods 2025”). 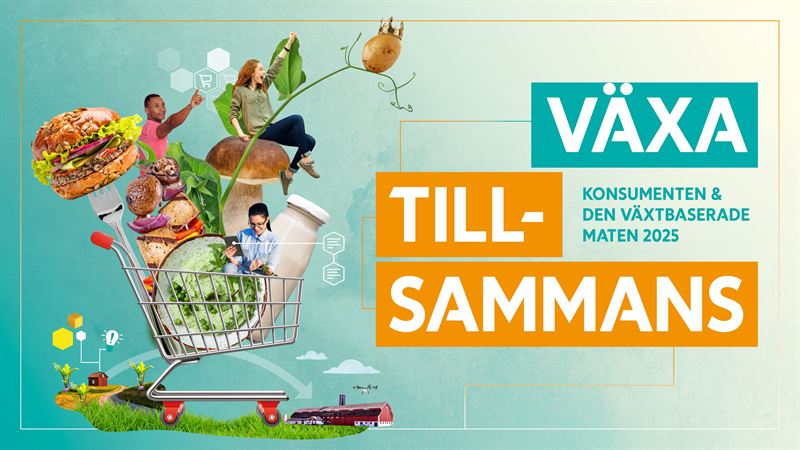 In this year’s future report, ICA has taken a deep-dive into consumers’ thoughts, behaviours and expectations for the future (2025) with respect to food, consumption, work life, recreation and the climate. In partnership with the research firm Novus, ICA has conducted the survey Konsumenten 2025 (“Consumer 2025”), which serves as partial documentation for the future report. Some of the conclusions are presented here.

Differences give rise to greater needs
On many issues, it is clear that consumers fall into two camps. For example, four in ten (43%) strongly believe that by 2025, society and life will have returned to how things were before the pandemic. Three in ten (30%) believe the opposite. There are also clear differences based on household incomes. 18% of people in the low-income bracket are very worried about new pandemics. Among high earners, this figure is only 9%.

“It is clear that the pandemic has shaken us, but also that we seem to have been affected differently based on our life situation, age and gender. We appear to be headed towards different futures, and it has never been as important to understand consumers’ needs as now,” says Ann-Katrin Tottie, future analyst at ICA.

Opportunities afforded by the digital and comfortable life
E-commerce has grown sharply during the pandemic, and for many people, videoconferencing services from the home have become commonplace. This applies not least for older people. The share of people aged 65-70 who have shopped online grew from 4% in February 2020 to 21% in March, according to HUI Research. Moreover, the survey Konsumenten 2025 (“Consumer 2025”) clearly shows that many expect to see a continuation of remote work and schooling, and want to see this in the future. More than six in ten (64%) believe that more people will be studying online in 2025. An almost equal number (59%) believe that people will work from home to a large extent. This will have consequences on our consumption of food and how we shop.

“Spending more time at home means that our consumption patterns will change fundamentally,” says Per Strömberg, CEO of ICA Gruppen. “For example, more lunches will be prepared for consumption at home and will be bought at consumers’ local stores, which we have also seen during the pandemic. At the same time, we are seeing continued strong growth in online grocery shopping.”

The home’s major renaissance
During the pandemic, the home took main stage as the hub of people’s lives. The future report shows that this has had consequences on how we view and value our own homes. This can be seen in skyrocketing housing prices, for example, but also in a growing interest in home renovation and garden work. Four in ten (41%) say that it will be important to invest in furnishings and renovation of their homes, and 30% say that growing your own vegetables will be important in 2025. One in three survey respondents say that they think more people will have moved to the countryside or smaller towns by 2025.

Longing for experiences and community

The pandemic’s compulsory isolation and social distancing also appears to have affected how we value contact with others, and it is clear that interaction with others will be more important in the future. Seven in ten respondents (71%) say that they will prioritise “more time for dinners with family and friends” by 2025, and one in three say that they will go to cafés and restaurants more frequently by 2025. The report also reveals that people feel it will be more important to meet “for real” the more digital our lives become.

Multi-dimensional hunt for meaning and health
For many people, the pandemic seems to also have entailed a transition to a more sustainable and conscious lifestyle. More than six in ten (64%) of respondents say that it will be more important to consume in a sustainable way in the future (72% of women and 56% of men).

“It is very gratifying that the trend of Swedish and locally produced food is continuing,” comments Anders Svensson, CEO of ICA Sweden. “Within the auspices of ICA Växa (“ICA Grow”), which was launched last year, a number of novel, green, Swedish-produced products will be launched this year. Another important project for us is to support smaller food producers who can deliver climate-smart and locally produced food to ICA stores across Sweden. During 2020 we re-launched our vendor portal, to which more than 550 local producers have signed up as of today.”

The report also describes a keen interest in taking care of oneself and one’s health in the future. This goes for both physical and mental well-being. Maintaining a sound work/life balance is important, say half of those asked.

About the Novus surveys

You can see the report in its entirety here: icaroster.se