Women are showing the way in the transition to a sustainable food system. This is one of the conclusions of this year’s future report Växa Tillsammans (“Grow Together”). In the report, ICA takes a close look at drivers and obstacles related to plant-based foods and identifies five distinct trends. One of the trends pertains to views on meat substitutes. Instead of a plant-based burger that imitates a traditional hamburger in taste, many consumers are now showing an interest in flavours that elevate the natural ingredients. 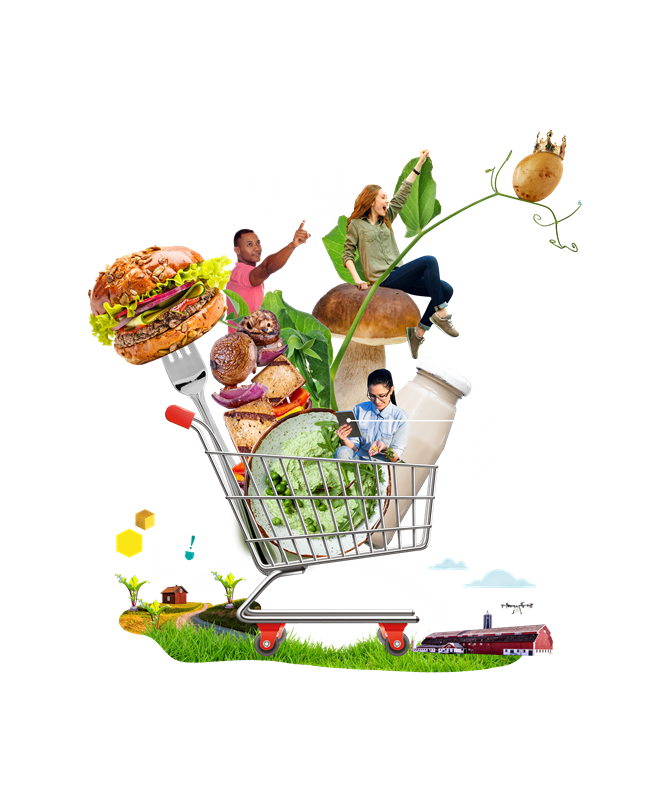 In this year’s report, ICA has partnered with research firm Novus to conduct the survey Växtbaserat 2025 (“Plant-based 2025”). Based on the results from this survey, five distinct, key insights have been identified: “Women are showing the way”, “The country-of-origin craze”, “Imitated or inspired”, “Nutrition provides direction”, and “The climate – a worthy driver”.

Women are showing the way
The fact that plant-based food is gaining ground is nothing new, but this year’s report shows significant differences concerning which consumer groups are driving this trend. “This year’s future report clearly shows how women and young people are a step ahead in driving plant-based cuisine. We are also seeing that women are concerned about the climate issue to a higher degree than men, which is likely one reason why women have a greater propensity to choose plant-based alternatives,” says

In ICA and Novus’ survey, 28% of women say that they think the food they choose has a large climate impact, whereas 18% of men say the same. There were also nearly three times as many women as men who say that they cook vegetarian or vegan food at least twice a week (29% of women, 11% of men). In response to which statements best describe their relationship to food, 31% of women say “I would eat more plant-based/vegetarian foods, but not semi- or fully processed products”, which 18% of men agreed with. The generational differences are also clear: in the younger population (18-29 yrs), 31% say that they prepare at least two vegetarian or vegan dishes a week, while the figures are 24% for the age group 30-49 yrs, 15% for the age group 50-64, and only 8% for 65-79 year olds.

The climate – a worthy driver
On the question of which factors are most important when choosing plant-based/vegetarian, 39% said a willingness to reduce their carbon footprint, which makes this the strongest driver behind choosing green.

The climate aspect can also be seen as a driver that may continue to grow ever-stronger among Swedish consumers in the coming years. The survey shows, namely, that when thinking about the future, nearly seven in ten (67%) are concerned about climate change, and in the younger age group of 18-29 year olds this number is even higher (74%). Among the so-called early adopters of new foods, who play a role in shaping coming years’ trends, we also see that nearly half (48%) believe that their choice of food has a major impact on the climate – a figure that is more than twice as high as the average (23%).

Imitated or inspired
The offering of substitute products is growing, and the report shows that for many consumers, it is more important that products taste like the ingredients they are made of rather than what they are intended to imitate. Hamburgers are a prime example. Among those who eat poultry/fish/meat today but who want to increase the amount of vegetarian food they eat as well as those who eat strictly vegetarian, today there are more who say that they want a plant-based burger to taste like the plants/ingredients they come from (39%) than that it should imitate meat (27%). However, when this question is put to all consumers, even meat-eaters, the response is very even between those who prefer imitation and those who prefer the flavour of the main ingredients: 37% say they preferably buy plant-based products that resemble meat, while 31% say they don’t.

“In the shift that we are currently undergoing, the abundance of green alternatives that try to imitate the meat-based original is natural, quite simply because it lowers the threshhold for someone to try them,” says Ann-Katrin Tottie. “But while imitations were a driver of the veg hype during the 2010s, the 2020s will create scope for greater variation and another type of cuisine where the vegetables themselves are central.”

The country-of-origin craze
Interest in Swedish and locally produced foods remains strong, and many consumers want to know more about the food they put on their plates. Nearly six in ten (59%) respondents say, for example, that they choose Swedish products to support local, small producers. Other drivers behind choosing Swedish and local are that they entail shorter transport and better animal welfare. Nearly four in ten (37%) also say that it is important for their own health that the ingredients are from Sweden when choosing plant-based/vegetarian.

Nutrition provides direction
The report shows that we are careful about what we eat and that there is keen interest in clear labelling of nutritional content of plant-based alternatives. This is important especially for those who prefer meat, fish and chicken. For 28% of those who identify themselves as “meat eaters”, “sufficient nutritional value” would be the most important reason for changing over to plant-based, followed by “tasty and good”. Of those in the survey who answered that they have begun including plant-based foods in their weekly menus or are curious about doing so, four in ten (39%) say that “getting enough protein” is most important for their health, and six in ten in that category want to see nutrition facts about the food.

Responses to the following question: “If you had the occasion to choose to eat plant-based/vegetarian food, which of the following factors is/are most important for you?”

About the Novus surveys

You can see the report in its entirety here: icaroster.se